Meggy Jr RGB - Ready to Use 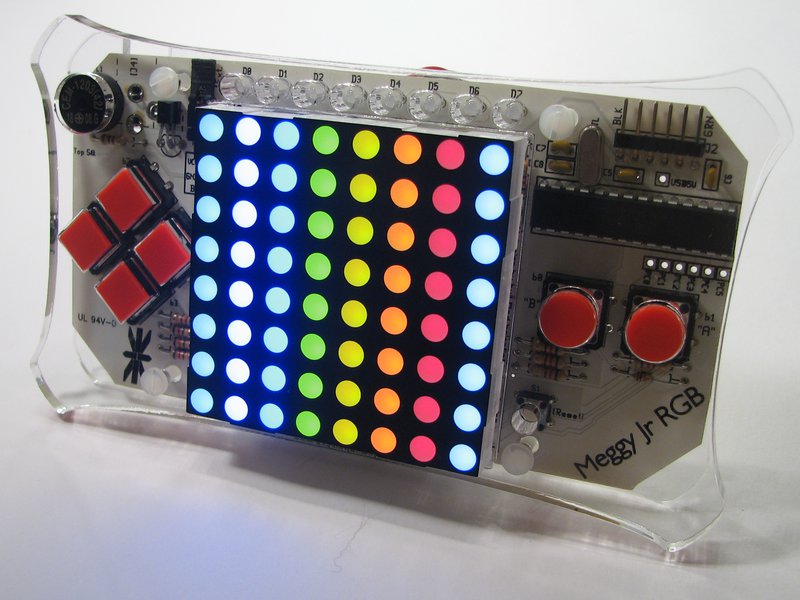 Meggy Jr RGB is a handheld platform for developing your own pixel-scale video games.

By popular demand, we're offering the Meggy Jr RGB fully assembled and ready to use. Just add batteries and install the included clear handle set and you're ready to play. Meggy Jr RGB is also available as a soldering kit.

Featuring an 8x8 RGB LED matrix display, super-duty video-game style buttons, customizable handles, a lo-fi audio transducer, and 8 extra LEDs for lives, score, ammo, or level, Meggy Jr RGB is a great little kit you won't want to miss. Meggy Jr is fast, programmable, open source, hackable and fun! Meggy Jr RGB is a little sister to our Peggy 2 LED display kits, and was designed with a different focus-- less soldering, more pixels in your palms. The 8x8 RGB matrix display provides a whole lot of pixels (192 LED elements), and the 8 auxiliary LEDs bring the grand total up to 200. The six tough extra-long-life buttons have excellent click-feel, and multiple programming interfaces let you take control of exactly what you're playing with. The system architecture is based on the Atmel ATmega328P microcontroller, and is Arduino compatible. Meggy Jr RGB includes a battery box and can run on batteries (3 'AAA' cells). A 2.5 mm center positive barrel jack is installed in case you want to get an optional ac adapter for endless playtime.

Programming Meggy Jr RGB
The microcontroller in the Meggy Jr RGB kit comes pre-programmed with "Attack of the Cherry Tomatoes," a pixel-blasting side-scrolling shoot-em-up with bombs, lasers, and ever advancing (red) dots that aim to ruin your whole day. You can get started playing immediately-- Absolutely no computer access or programming is needed between opening the box and blasting vicious vegetables. If you're inclined, Meggy Jr RGB can do a whole lot more: it is designed as a platform for programming your own games. Meggy Jr RGB can be programmed in the popular Arduino software environment, through an optional USB-TTL interface (sold separately). Mac, Windows, and Linux computers are all well supported, and all of the software that you'll need is available to download-- for free --online.

To get a head start, you can download the Meggy Jr RGB Programing guide here-- it's a detailed guide to our simple library routines for using Meggy Jr RGB. The library provides an interrupt-based screen redraw at a default rate of 120 Hz, multiple brightness levels, and simple functions to write data to the video buffer. So easy a kid could do it. (Proof: Attack of the Cherry Tomatoes was written by a 14-year old.)

The Meggy Jr RGB library is an evolving open source project and your own code contributions are welcome. We have a number of user-contributed games and other programs available for download; many of these are listed on the documentation site. Even if you don't want to write your own programs, you can download other people's programs and run them on your Meggy Jr RGB.